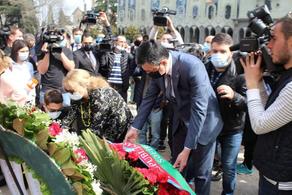 Diplomats laid a wreath at the April 9 memorial on Rustaveli Avenue.

Thirty-two years have passed since the tragedy of April 9, 1989.

"The tragedy of 9 April 1989 and 20 January 1990 was a massacre carried out by the Soviet Union leaders to make the Georgian and Azerbaijani people lose their will to achieve freedom. In both cases, the result was counterproductive. The Azerbaijani and Georgian people restored their sovereignty and independence, developed mutually useful relations, and turned them into strategic partnerships. Precisely this strategic partnership created a modern image of the South Caucasus, opened our region to the world, and laid the foundation for sustainable development. I am confident that the two friends and neighbors, Azerbaijan and Georgia, will support one another more to achieve more success in the future,'' Azerbaijani ambassador Faig Guliyev said.