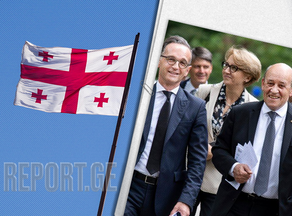 Under the statement, the far-reaching partnership was established under the Elysée Treaty, signed on January 22, 1963, which laid the foundation for friendship between the two countries.

It says the aim was a lasting peace in Europe.

"The Aachen Treaty, signed on January 22, 2019, has deepened cooperation in all areas,'' the statement reads.

"The Franco-German friendship also aims the wellbeing of Georgia. This year, French and German development agencies have been incredibly committed to support Georgia's development and will continue to do so. In particular, they work together with their Georgian partners in the energy sector and remain involved in shaping tomorrow's world. Besides, France and Germany support the development of Georgia's democratic institutions, most recently - through the joint declaration on December 12.

With these examples, in the fields of education, research and business, we will continue working together with enthusiasm to accompany our Georgian friends and partners on their path of rapprochement with Europe,'' the statement reads.