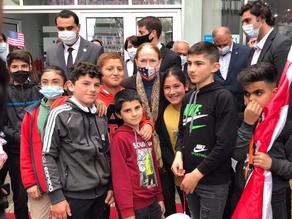 In the ambassador's words, the opening of the American Corner in Georgia demonstrates that close links bond the two countries.

Kelly Degnan also said she was glad Marneuli allocated a spot for the American Corner, where people would be able to familiarize themselves with American culture, which is so versatile and diverse.

The newly opened American Corner is an American-style community center aiming at promoting cooperation with Georgian and American people and bringing the two nations closer to each other.

All will be welcome to visit the American Corner without any age limit.