Amiran Gamkrelidze: The use of rapid antigen-based tests will be expanded 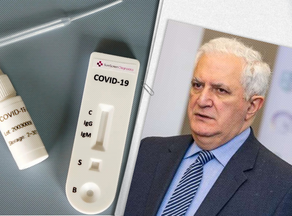 "Early detection and identification of the virus by rapid antigen-based tests will be maximized in the country during the two months of restrictions," Amiran Gamkrelidze, the head of the National Center for Disease Control and Public Health, stated.

According to Gamkrelidze, if the tests based on the new generation antigen are done correctly, they give almost the same result as the PCR test.

"It is essential to expand further access to testing for early identification during the period when restrictions are imposed. Within two months, during the period of restrictions developed by the government, early detection and identification in the country will be maximized by rapid antigen-based tests. The decision has already been made, the relevant decree and the minister's order will be issued. We have to conduct 10, 11, 12 thousand PCR tests in the country every day with the same amount of rapid tests," Gamkrelidze said.