Anti-Namakhvani HPP rally organizer: We will offer them much stronger resistance tomorrow 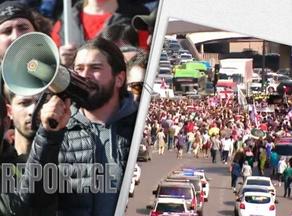 Anti-Namakhvani HPP rally participants plan to hold a public march at 4 p.m. on 25 May. Protest organizer Varlam Goletiani said protests would continue until their demands are met.

''I think the entire country, and notably, the capital, will back protesters in their fair and just fight. Tomorrow at 4 p.m., we will offer them much stronger resistance than we are offering now. We will be far more in number. We will hold a march and block certain locations,'' the rally organizer declared.