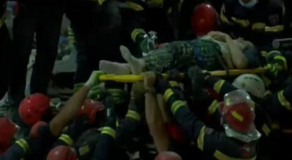 The spouse of the young woman who has recently been pulled out of the rubble at the Batumi accident site says that his wife has severely been injured and cannot speak. The man is now waiting for his children to be rescued.

As health Minister of Ajara Nino Nizharadze says, the injured woman is being now subject to examination at hospital, and more information about her medical condition will be released later.

Rescuers have pulled the young woman out of the rubble recently. She presumably was trapped in the rubble with her two children and the brother-in-law.