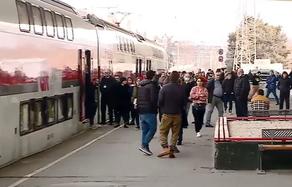 The Batumi-Tbilisi train has reportedly been canceled at the request of passengers. Allegedly, two Chinese citizens, who were among the passengers, showed the symptoms of the virus. Everyone refused to travel by train unless the two sick persons were evacuated. Doctors are expected to arrive at the scene soon.