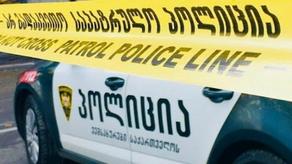 A 27-year-old boy jumped from the fourth floor of a quarantined hotel in Batumi. The Ministry of Internal Affairs informed report.ge about the incident. He got injured as a result and was taken to Batumi International Hospital by the ambulance.

According to the ministry, the 27-year-old boy crossed the Sarpi border yesterday, after which he was taken to a mandatory quarantine with an accompanying person.

"The Adjara Police Department of the Ministry of Internal Affairs launched an investigation into the incident that took place in a quarantine area in one of the hotels in Batumi on August 13 under Article 115 of the Criminal Code of Georgia.

The investigation established that Georgian citizen F.J., born in 1993, on August 13 of this year, entered Georgia from the Sarpi border checkpoint, after which he got transferred to one of the hotels in one of the quarantine rooms in Batumi, in order to pass the mandatory quarantine.

On August 14, F.J., behaved inadequately and aggressively. The investigation is not aware of the reason behind his actions," the agency said.