Briefing at Ministry of Internal Affairs 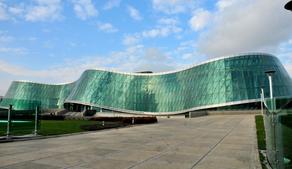 The Ministry of Internal Affairs set a briefing at 14:00, held by Nino Tsatsiashvili, the Director of the Quality Monitoring Department of Human Rights Protection.

Public Relations Office of the MIA told report.ge that the topic of the briefing will be the current events happening in the country.

The premiere of the first Georgian gay romance film directed by Georgian Levan Akini is planned to be held at Tbilisi and Batumi cinemas on Nov 8-10. Several organizations threaten to disrupt the screening of the film. MIA calls on the society to uphold the law.

The film was included among 25 films by the Director’s Fortnight. The premiere of the movie took place at The 72nd annual Cannes Film Festival on May 16.

"And Then We Danced" the movie that has won a number of international awards, will be presented at the 92nd Academy Awards Ceremony on behalf of Sweden.