Brother of Deacon Giorgi Mamaladze sets up tent outside Parliament 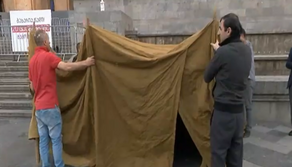 Tornike Mamaladze, brother of Deacon Giorgi Mamaladze, who was subjected to court trial in relation to the cyanide case is threatening that he will go on hunger strike. He has already set up a tent outside the legislative body. As Tornike Mamaladze maintains, the Patriarch’s attendant has deceived him by promising that he would get his brother out of jail. This promise made him terminate weeks-long protest action at the entrance of the Patriarchate.

“I’ve been tricked by the representatives of clergy who preach from their pulpits and share Jesus Christ’s teachings with us, but, unfortunately, they themselves are wayward. By this act, I am protesting against my innocent brother’s imprisonment, and I do support those innocent people who were detained on 20 June and have been behind bars so far,” stated Tornike Mamaladze.

As per Mamaladze, his paralyzed brother has been in prison hospital since February.