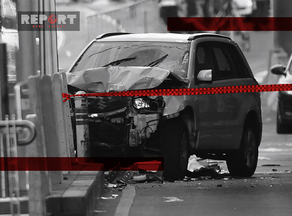 Three people were injured in a car accident in Batumi. The accident occurred near the so-called Mejini Water Settlement on Pridon Khalvashi Street. Three cars collided. The injured were transported to different hospitals in Batumi.

According to doctors one of the patient’s condition is relatively serious, with multiple injuries to his body.

Investigation was launched under the second part of Article 276 of the Criminal Code of Georgia, which implies violation of traffic rules.