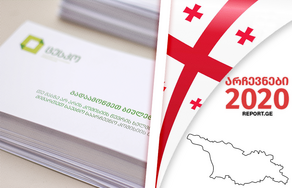 The second round of parliamentary elections ended in Georgia. As of 20:00 local time, the voter turnout was 26.29%.

“A total of 562,664 voters took part in the election. The district election commissions received 12 complaints. Most of them were about procedural violations,” Natia Ioseliani, spokesperson of the Central Election Commission says.

The second round of parliamentary elections was held in 17 majoritarian constituencies of Georgia today.