“Change” Movement organized a performance at the Parliament 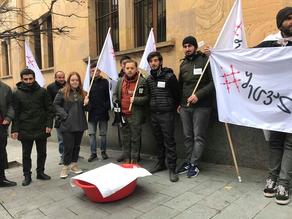 #Change Movement members organized a performance at the entrance of the Parliament building. They brought a bowl and filled it up with water. According to their statement, they protest the fact that the Head of the Parliament, Archil Talakvadze had traveled to Italy to Como lake. They declared that they would go anywhere to reveal the facts of injustice and hence create discomfort for the members of Georgian Dream party. With this connection internet movement “let him show his passport” was initiated.The goal of the movement is to prove the Chairman was lying when he said he had not been at Como lake.