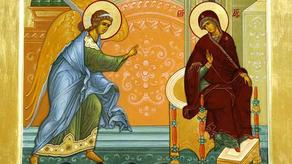 Orthodox Christians are marking the Feast of the Annunciation of the Virgin Mary today.

On this day, the Church celebrates the event described in the Gospel According to Luke - the meeting between the Archangel Gabriel and the Virgin Mary, during which he told Her the good news that She would give birth to the Savior.

This is one of the fixed-date feasts in the liturgical year and it is always marked on April 7.

The Feast of the Annunciation celebrates the Incarnation of the Second Person of the Trinity and the salvation of all mankind.