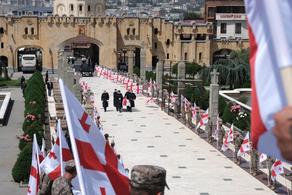 At the Cathedral of the Holy Trinity in Tbilisi, a civil funeral service was held for the commander-in-chief of the army of the First Georgian Democratic Republic, the national hero of Georgia, General Giorgi Kvinitadze.

On May 26, on the Independence Day of Georgia, his body will be buried in the Pantheon of Mtatsminda.

The body of General Giorgi Kvinitadze was transferred from France to Georgia on May 22.

He is a symbol of the fight against the Russian occupation.