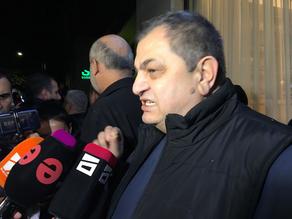 Davit Berdzenishvili, who joined the rally, has been physically abused. Members of Georgian nationalist group Georgian March first verbally abused him, with this being followed by physical abuse too; Mr. Berdzenishvili was taken from that area; however, one of the members chased after him.

Two protesters who threw firecrackers outside the Amirani Cinema have recently been detained, with the released information being confirmed to report.ge by the MIA. Several law enforcers have reportedly been injured in the incident; they were taken inside the cinema building. Doctors, who are now inside the cinema, have provided them with basic first-aid medical treatment.

The situation outside the Amirani Cinema is extremely tense, with the protesters not allowing the cinema visitors to enter it. Police have arranged the cordon at the entrance of Amirani, however, the protesters are attempting to push through it. As the report.ge correspondent informs, the building entrance has been closed so far. The cinema administration has attempted to open it thrice but all attempts have proved fruitless.

The protesters are reportedly throwing firecrackers.

Protesters in Vera Park gathered outside the Amirani Cinema around half an hour ago. As the demonstrators say, they will make everyone visiting the cinema to watch "And then We Danced" feature walk down the "Corridor of Shame." The demonstrators also say that they will disrupt the film screening in the cinema.