Davit Liklikadze: I want to write about this beautiful city of the Caspian Sea and the people of Azerbaijan 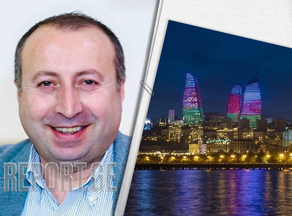 Journalist and actor Davit Liklikadze, who was in Baku with Georgian bloggers as part of a press tour organized by the Embassy of Azerbaijan, writes about his experience on the social network after the trip.

Liklikadze writes that he is fascinated by the cleanliness of the city, the safe environment, and, most importantly, the warm, smiling, and friendly people.

At the same time, the Georgian journalist was also fascinated by the local cuisine.

"I have to write about Baku, this beautiful city of the Caspian Sea and the Azerbaijani people; it was a real joy to be a foreigner and Georgian there...

First of all, I would like to express my gratitude to the Embassy of Azerbaijan, which selected me to participate in the press tour, consisting of 17 Georgian journalists and bloggers. Many thanks to Tamerlan Tagiyev, this young man, an embassy employee, thanks to whom we experienced a great trip in Azerbaijan. Apart from the Embassy of Azerbaijan, I would like to thank the SOCAR Georgia delegation, thanks to which I did not spend a single Azerbaijani manat. Absolutely everything was financed.

We arrived in Baku. I saw the cleanest city where you can sit on the street and pavement. I saw the city with the greatest warmth, smiling and happy people (I do not know if this is their way of life or a sign of a victorious people, I can not tell you, because I am a child of a country that has not seen victory, so I do not know what it is). Everyone is happy to see a Georgian; they call you "Kardash," which means brother ... I turned to many people in a really brotherly spirit, and we welcomed each other as if we were classmates we had not seen for years.

Baku is a miracle city... it is beautiful! Clearly, this is largely due to the Caspian Sea factor. How beautiful was the Caspian Sea? I even put my hand in its oily water. Lots of tourists walk in the city. You have a feeling of absolute security. We were hosted by President Aliyev's administration, and I do not know if that is the case for all or not. The city smells of Azerbaijani tea. While visiting tourist attractions, it was amazing to see the Maiden Tower, which (like all towers in the world) holds a tragic love story shrouded in mystery. The fountains are extraordinary. There is a beautiful fountain at every footstep. We took a walk in Old Baku and lived in New Baku. I want to say that both architectures are amazingly combined with each other and do not irritate at all; on the contrary, it makes you more impressed.

In Baku and other cities, we had lunch and dinner at the restaurant every day. We only had breakfast at the hotel. We visited at least ten restaurants, and I want to tell you that no one can compare with Azerbaijan when it comes to meat—mostly dominated by sheep. They miraculously prepare meat kebab, barbecue, steak, ribs, medallions. During the last two days, I ate chicken and veal (for reference, pigs are not eaten in Azerbaijan)," Liklikadze writes.

Davit Liklikadze writes that during his visit to Azerbaijan, a number of important meetings were held with high-ranking officials of the Presidential Administration.

The author emphasizes the particularly warm reception received from the hosts.

According to him, Georgian bloggers also visited Karabakh after Baku.

"We were not in Baku only to have fun. We had several important official meetings with high-ranking officials in the administration of President Ilham Aliyev. We were especially warmly received by Hikmet Hajiyev, the President's Advisor on Foreign Affairs.

This visit was very important and helpful. I will remember Azerbaijan and Baku as a delicious, aromatic, and diverse place," Liklikadze writes.