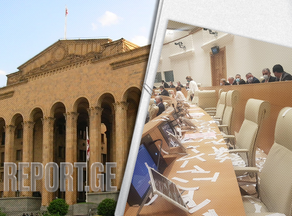 Protest performance took place at the Parliament of Georgia. In the sitting hall, the activists threw papers at the deputies, reading -"What is happening at Ninotsminda boarding house?"

"The children are still locked up there, and you are sitting doing nothing," the young man told lawmakers.

Young Labor activists were pulled out of the hall by security guards.

MP Tariel Nakaidze spreads the photos of the action performance on the social network and writes that he shares the spirit of the protest.