Elene Khoshtaria is unconscious - an ambulance arrives at the Parliament 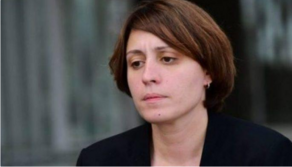 Elene Khoshtaria, the leader of "Droa," who has been on hunger strike in the parliament building for the sixth day, is unconscious.

According to the ambulance doctor, since Khoshtaria had one episode of loss of consciousness, it is advisable for her to be taken to the hospital as vital parameters are now within the norm.

"It seems that there was an episode of drop in blood pressure. When we tested, it was 120/70, we measured it with a glucometer, saturation, everything is within the norm, she refused medical help and hospitalization," said the ambulance doctor.

Elene Khoshtaria has been on a hunger strike for the sixth day, demanding the transfer of the third president of Georgia, Mikheil Saakashvili, to a civilian hospital. She only takes water and says that she will not stop the hunger until the demand is met.