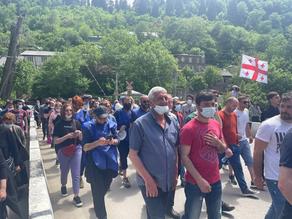 The striking employees of the company "Borjomi" have been organizing protest rallies for the third day. They are holding a rally and walking from the first factory to the second one.

They say they will not give up, and the protest will continue until the company meets the demands.

Yesterday the company suspended the operation of both factories.