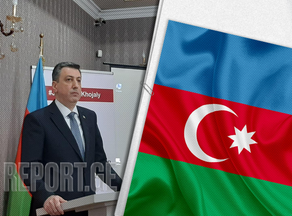 The Embassy of the Republic of Azerbaijan to Georgia and Mirza Fatali Akhundov Museum of Azerbaijan Culture have organized an event in Tbilisi dedicated to the 29th anniversary of the Khojaly genocide, one of the most tragic days in Azerbaijan's history.

Within the framework of the event, the photo gallery wall, with the photos featuring the Khojaly tragedy, was arranged. Initially, those present at the event honored the Khojaly tragedy victims with a one-minute silence. The event participants showed guests the 2008 documentary produced within the "Justice for Khojaly" International Awareness Campaign at the initiative of Vice-president of the Heydar Aliyev Foundation, Leyla Aliyeva.

"Lots of thanks for coming here today and paying homage to the Khojaly tragedy victims. February 26 marks the 29th anniversary of the Khojaly genocide, one of the most terrible tragedies of the last century. This aggressive act resulted in the occupation of 20% of Azerbaijan's territory, and more than a million Azerbaijanis were subject to violent evictions from their ancestral homeland. During this awful tragedy, more than 7,000 peaceful citizens were in the town.

Since 1991, the town has been occupied by Armenians. After the massive bombardment in 1992, the Armed Forces of Armenia, with the help of the Soviet Union troops, conquered Khojaly. The violent attack left 613 peaceful citizens dead and the town nearly ruined.

The Kjojaly tragedy is a clear testimony that similar actions by Armenians are systematic and aim to subject the peaceful population to genocide. The Armed Forces of Armenia trampled on citizens' fundamental rights to which they are entitled under the Geneva Convention," Faig Guliyev declared.