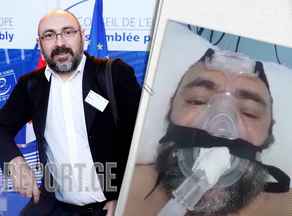 Famous Georgian photographer Giorgi Abdaladze has been undergoing treatment at the First University Clinic for more than a month. Currently, his condition is stable; however, a few days ago, he was unconscious and connected to the device.

As Giorgi Abdaladze told report.ge, the fact that he was reborn is the merit of Levan Ratiani.

"I have two birthdays, in August and April. While I was in resuscitation, there was a period when I said goodbye to everyone and everything. My condition was hopeless. I do not wish for anyone to find themselves in resuscitation; it is a completely different world - a complete hell. I find it difficult to describe. Ten days ago, I was nearly dead. I am better today; I can breathe, I have strength and hope. Levan Ratiani is a magician.

I have seen everything: war, prison, but I could not imagine this. It is unbelievable what doctors and nurses can do; some do not go home for ten days. This is not a job, this is heroism, and they are not doctors; they are lifesavers.

I want to shoot and show people what happens in resuscitation, how doctors fight death with their bare hands. Mr. Levan is a fantastic doctor and person. For weeks, he worked on my lungs with his own hands to save me," Giorgi Abdaladze said.

As Giorgi says, he became infected during the filming, and it all started with high fevers.

"Once I took off the mask, and that is when I got infected.

I often hear doubts about vaccination. People, look at me, look at people like me in resuscitation and keep in mind, this is a terrible disease, and you can protect yourself from it only through vaccination, mask and keeping distance," Giorgi Abdaladze told Report.ge.