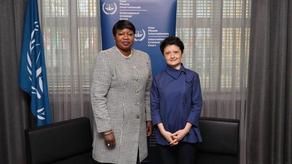 According to Fatou Bensouda, the Prosecutor of the Hague based International Criminal Court the investigation into the Russia-Georgia war is in an active phase. Bensouda thinks that before her term expires, the given case will have certain results. Bensuda made this statement while meeting with Tea Tsulukiani, the Minister of Justice of Georgia.

The Minister of Justice spoke about the Russia-Georgia war investigation, noting that the Georgian population, who was a victim of ethnic cleansing, crimes against humanity and war crimes during the 2008 Russian-Georgian war is waiting for results from the investigation which should bring justice. It was also noted that the cooperation between the two sides is at a very high level.

Tea Tsulukiani met with Fatou Bensouda within the framework of the 18th Assembly of the International Criminal Court.

Bensouda's term of authority expires at the end of 2020.