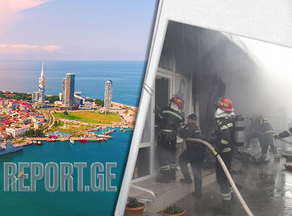 "The fire at Khopa market has been extinguished," the Emergency Management Agency spreads information.

According to them, no one was injured in the accident.

"The Public Security Management Center "112" of the Ministry of Internal Affairs received information about smoke observed on the Khopa market territory in Batumi. Emergency management personnel arrived at the scene as soon as possible. The fire got spread in a clothing store, and there was danger of spreading to nearby shops. Firefighters extinguished the fire in the one-story building in time. Seven groups of the Fire and Rescue Department worked on the spot," the statement said.

A fire recently broke out in a clothing store at the Khopa market in Batumi.