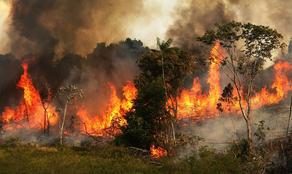 A fire is reportedly ravaging the old graveyard area in Rustavi, with three fire brigades attempting to localize it.

Wind makes localization of fire a hard task to accomplish. Two fire engines were first involved in the operation, with additional crew having been sent later.

No danger of the fire reaching the residential area, just a few kilometres away from the scene of the incident, exists at this point.