Firefighters and rescuers carrying wounded hunter out of woods - PHOTO 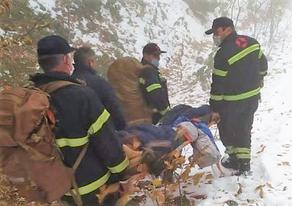 According to the Emergency Management Center, firefighters and rescuers are trying to take a wounded hunter out of the wood.

The Center informs that in the vicinity of the Jvari municipality wood, Tsalenjikha, the hunter sustained a self-inflicted gunshot wound after accidentally shooting a hunting rifle.

They tried to transport the hunter with a border police helicopter, but severe weather prevented them from doing so.

Firefighters and rescuers are now carrying the injured hunter with a stretcher. He is reportedly in critical condition.