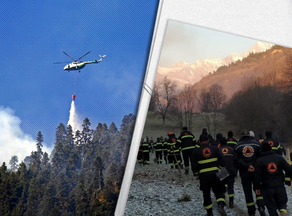 According to the Emergency Management Service of the Ministry of Internal Affairs, a fire is ravaging the forest near the village of Latali, the Svaneti region. The blaze has spread to nearby bushes and vegetation. Hotspots are in the vicinity of the slope where a fire has already been extinguished.

Firefighting efforts are underway, with 50 firefighters battling the blaze. Additional forces are now being mobilized in Tbilisi, Imereti, and Samegrelo, with 100 more firefighters to arrive at the scene late at night today. A helicopter is also ready to be involved in the efforts if the need for this emerges.

The fire broke out in the forest on October 17.