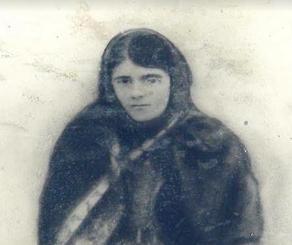 In the fall of 1918, the Georgian press wrote proudly:

"Among the speakers is a Muslim woman from the town of Karajala, Peri-Khan Sofiyeva. The first National Assembly scheduled for December 2..."

Recently, a memorial plaque of the first democratically elected Muslim woman in the world was placed on the chairs in Freedom Square in Tbilisi.

Peri-Khan Sofiyeva was born in 1884 in the village of Karajala, inhabited by Azerbaijanis in Georgia. She was the only girl in a family of nine.

This black-and-white photo is the only surviving image of Sofiyeva. Although she was an active person and lived for a long time, very little information is available.

On May 26, 1918, Georgia declared independence and held the first democratic elections in the country. Peri-Khan Sofiyeva, who was 34-years-old, won the elections. Her victory is proof that she was an authority in the village.

People respected her throughout the province.

In Karajala, the older generation still remembers her name. Man-shield is how the elders refer to the "matriarch" of the village and the region.

The descendants of Peri-Khan Sofiyeva live in the same village. They were not surprised by the researchers' interest in their ancestors. Her distinctive nature and behavior still amaze everyone.

All the information obtained about Peri-Khan Sofiyeva is based on her brother's descendants' stories, confirmed by other village elders.

According to them, Peri-Khan Sofiyeva was the third daughter of a strong and influential family. Despite having brothers in the family, from an early age, Peri-Khan Sofiyeva took over the function of a leader. Her words and deeds became so authoritative that the whole family obeyed her. Soon her influence extended beyond the family.

Over time, she became a recognized leader in the countryside and the region, radically shattering stereotypes about Muslim women's capabilities in traditional society. As told, Peri-Khan was always in the company of men and was in charge of agricultural affairs. They asked her for advice, invited her as a mediator in various disputes, and invited her as a leader of traditional customs or rituals. Her words and deeds were decisive.

Peri-Khan was a philanthropist; she always helped newlywed families and orphans of deceased villagers. According to a vague legend, in the 1910s, she launched an economic initiative and took a loan from a state bank. The villagers say she arranged a station on the railway line for the village of Karajalar.

According to her descendants, Peri-Khan Sofiyeva smoked tobacco, which is categorically unacceptable for Muslim women. However, she knew how to read the Quran and was always invited to read the Holy Book on rituals. It is known that during her membership, she helped the construction of a railway station in her native village.

In 1921, as a result of the occupation of Georgia by Soviet troops, the property of members of the National Assembly was confiscated. According to Peri-Khan Sofiyeva's relatives, she hated the Soviet Union and the Soviet system. During Stalin's repression, 5 out of 8 brothers were shot dead and buried in a mass grave. Their bodies have not yet been found.

Peri-Khan Sofiyeva reportedly died of a heart attack in 1953 after hearing that one of her nephews had been arrested and deported.