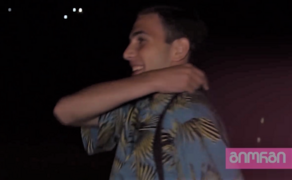 The Pirveli TV Company obtained the video footage of the fateful night after filming of which young Georgian footballer Giorgi Shakarashvili tragically died.

The video footage shows that the late sportsman, together with some boys, was heading for Lisi from Mtskheta.

The video also shows that the boys detect a drop of blood on one of the boys' shirts.