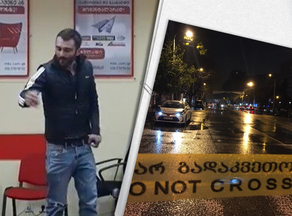 The captor who has broken into JSC Microfinance Organization Micro Business Capital on Tsereteli Avenue has reportedly released four more hostages. Three hostages only are now inside the building. A young woman and a middle-aged man have left the office earlier. The gunman, who attacked the microfinance office around two hours ago, let the two hostages go after negotiations with representatives of the MIA.

The name of the captor who took nine hostages in the micro-finance organization is Levan Zurabishvili. He has recently started live-streaming on social media; however, the live-streaming was suddenly stopped, and he asked a hostage to help him live-stream again.

The gunman's requirements are as follows: the abolishment of gambling, reduction of loan interest rates to 7 percent, and reduction of prescription drug costs.

Stores and other commercial facilities have been closed on Tsereteli Avenue for security reasons as the special operation is underway in JSC Microfinance Organization Micro Business Capital.

Residents have also been evacuated from the building in which the microfinance organization carries out its operations.

The MIA says that the gunman has taken nine hostages. Vazha Siradze, the head of the Interior Ministry's Patrol Police Department, has recently released the information.