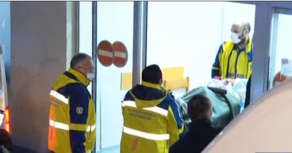 Genadi Bestaev, whom the occupiers illegally detained, is in critical condition. He was taken to the territory controlled by the central government of Georgia late at night.

A patient from Tskhinvali prison was admitted to a Georgian-Dutch hospital with a diagnosis of hemorrhagic stroke.

He underwent emergency surgery. According to doctors, Bestaev is in a coma and is in the intensive care unit.

"The patient has been transferred in a critical condition and is on breathing control, in a coma. He had a hemorrhagic stroke. It is impossible to predict at the moment. He is in a severe condition," said Giorgi Gvaramadze, a resuscitator on duty.

Regarding the transfer of Bestaev to the territory controlled by the Georgian authorities, the Security Committee of the de facto republic issued a special statement and wrote that the convict Bestaev was pardoned by Anatoly Bibilov due to deteriorating health.

Representatives of the occupation regime arrested Genadi Bestaev on November 29, 2019, and sentenced him to 2 years in prison.