Georgia has new ambassador to Estonia 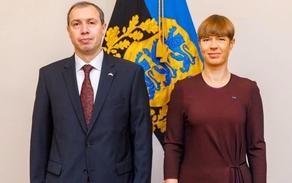 Georgia has a new ambassador to Estonia. Newly appointed Ambassador Archil Karaulashvili has presented his credentials to Estonian President Kersti Kaljulaid. After the credentials were presented, close cooperation between Georgia and Estonia was stressed and the process of Georgia's integration within the Euro-Atlantic family was discussed at the meeting.

At the meeting, special focus was made on the current situation in the breakaway regions of Georgia, with the Estonian President having expressed her support to Georgia's sovereignty and territorial integrity within the internationally recognized borders.

The Ambassador to Estonia earlier was Tea Akhvlediani, who was appointed to the post of Deputy Minister of Internally Displaced Persons from the Occupied Territories, Labour, Health and Social Affairs of Georgia.

For years, Archil Karaulashvili served as deputy minister on European and Euro-Atlantic Integration Issues and later as head of General Directorate for European Integration at the Ministry of Foreign Affairs of Georgia.