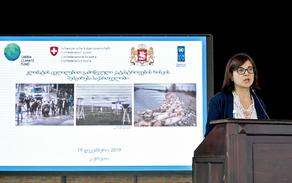 Thirteen self-government of Georgian municipalities, NGOs, and CBO, as well as the representatives of the regional universities, participated in the forum to discuss the climate risks and the methods of the risk management on the local level.

The forum, organized in the large-scale program framework, aimed at protection the Georgian population from the risks caused by the climate catastrophes took place in Kachreti.

“Active engagement of the municipalities and local population in this unprecedented national program is of particular importance to achieve the program goals. The catastrophes caused by climate change are our common risk, which requires a systemic approach and the overall involvement”, - stated Solomon Pavliashvili, Deputy Minister of Environment Protection and Agriculture.

A 74-million-dollar program started in 2019 and will be implemented in the basins of eleven rivers during the coming seven years. As a result of the program, Georgia is planned to improve resilience towards climate risks, while 1.7 million people will become better protected from floods, debris, droughts, and other climate risks.

The program has already defined the thirteen municipalities the representatives of which will be involved in the project implementation process – Lagodekhi, Sighnaghi, Akhmeta, Gori, Telavi, Abasha, Senaki, Samtredia, Khobi, Kobuleti, Ozurgeti, Lanchkhuti, and Chokhatauri – the regions with particularly high exposure to the risks caused by climate catastrophes. The program prioritized these municipalities for urgent support. Besides, over 100 communities will benefit from the program.