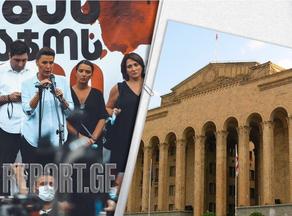 Civic activists and representatives of different media outlets have staged a protest rally outside the parliament of Georgia. They demand the resignation of PM Gharibashvili and the government.

The road near the parliament has been blocked.

The demonstration was also held yesterday.

Protests have been underway for more than three hours outside the parliament.

Protests against violent activities have been underway outside the parliament for two days now.