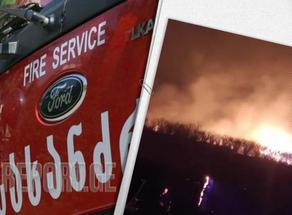 The Emergency Management Agency says that 250 fire locations have been determined in Georgia, and 242 fires extinguished.

The Agency says that two helicopters and more than 700 firefighters and rescuers, who are employing more than 70 fire and rescue equipment in their operations, are combating bush and grass fires across Georgia. Firefighting operations are underway in the country 24/7.

Fires have not resulted in injuries.

Firefighters have reportedly stabilized the situation in the region of Shida Kartli, the Kaspi municipality, namely, Rkoni gorge; firefighters plan to combat the fire in the gorge all night.

The fire location has been determined in Racha-Lechkhumi, with the situation being under control there now. Firefighters have put out fires in some parts of the Imereti region, specifically in the villages of Zarati, the Khoni municipality, and the Dzedzileti village.

In other parts of Georgia, firefighting efforts are underway. In some areas, fire crews are still trying to localize fires.

The Emergency Management Agency warns the public against burning grass in agricultural lands not to pose threats to nature, the environment, and people's lives.