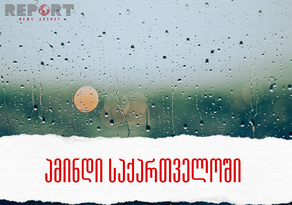 Forecasters expect short rainfall in most parts of Georgia today, with temperatures in Tbilisi settling at 23 degrees at night and 34 degrees during the day. Rain can be expected in the capital.

In Batumi and Zugdidi, temperatures will reach 21 degrees at night and 34 and 25 degrees respectively during the day. In Kutaisi, temps will climb to 22 at night and 28 degrees in the daytime.