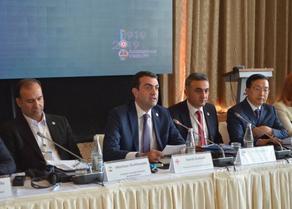 The International Conference Strong and Authoritative Advocacy – Present Challenges was held in Baku, which marked the 100th anniversary of Azerbaijani Advocacy.

Georgian Bar Association led by its Chairman Davit Asatiani attended the event. In his speech at the conference, Mr. Asatiani congratulated his Azerbaijani colleagues on the 100th anniversary and elaborated upon Georgia’s experience in this field: he underscored the importance of unified advocacy and the role of Georgian lawyers in the formation of just and reliable legal system, as well as highlighted other key issues.