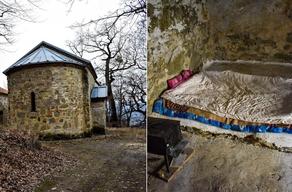 The deacon's post reads that somebody is squatting in the disused church trying to convert it into a home. In his words, the alter has been used as firewood storage, while in the 12th century unique frescos in the nearby larger church, they have inserted nails.

"The patriarchate, as an owner, refuses to keep an eye on old churches, and the Agency for Cultural Heritage Preservation is in deep slumber.

No inspection or monitoring is held whatsoever. The national treasure has been abandoned, and its fate is now at stake," the deacon wrote.