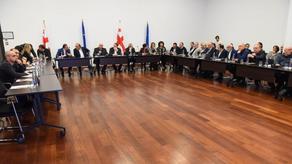 The meeting between the representatives of the Georgian Dream and left-wing political parties will be held tomorrow at 10 am,at the Baltimore Hotel, with the meeting having been initiated by the Diplomatic Corps.

After rejection of a proportional representation (PR) voting system and two-week protest rallies, this is the first meeting between the opposing parties. However, it is true that they have agreed to hold a dialogue, the standpoint of the ruling party has remained unchanged.

The united opposition is offering the government the bill based on the German model as a way out from the current impasse, with the presentation of the bill having been held today.

The proposed bill, which has already been signed by around 30 leaders of different parties, envisages proportional distribution of majoritarian mandates. According to the updated version of the bill, a party or a bloc cannot receive more mandates than those shown by election results in percentages. The amendments also envisage 3% threshold.

The updated version of the bill will be forwarded to the Venice Commission and ODIHR.

NATO Secretary General’s Special Representative for the Caucasus and Central Asia James Appathurai has responded to the current developments in Georgia, and more specifically the dialogue set to be held between the government and the opposition, on the social media by posting the following:

"NATO (and I) watching events in Georgia closely and with concern. It is important that there is dialogue to move beyond the current impasse. I’m encouraged by reports of an upcoming meeting between the government and the opposition. Georgia has a strong and vibrant democracy, and that should be demonstrated again in finding a consensual way forward."