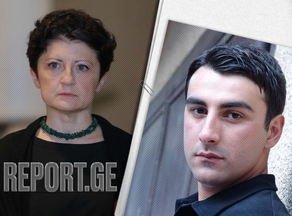 Georgian Minister of Culture Tea Tsulukiani says that actor Beso Zanguri must leave the theatre in the shortest possible time.

After her public statement, actress Makashvili was summoned for questioning.

Rustaveli Theatre, where Beso Zabnguri works, condemned any kind of violence but did not sack the actor. However, later it canceled the performance in which Mr. Zanguri played.