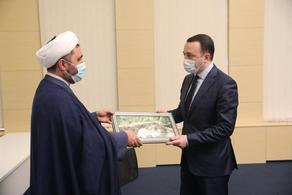 ''I congratulate you on the Ramazan Bayrami holiday. This is the day of love, kindness, and compassion,'' Georgian PM Irakli Gharibashvili congratulated Muslim religious leaders on their holiday.

Mr. Gharibashvili met with Muslim religious leaders in the administration of the government. Chairman of the State Agency for Religious Issues Zaza Vashakmadze attended the meeting.

At the meeting, the Georgian Prime Minister told the religious leaders that they have a shared country, and they all, together, are exerting vigorous efforts to empower it and make it prosper.

On his part, Georgian Mufti Adam Shantadze thanked the PM for his support to the Muslim community in holding their religious rituals.

The Mufti stressed that they follow all regulations by the health ministry and expressed confidence that they will beat the pandemic through joint efforts.