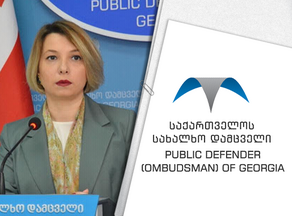 Georgian Ombudsman Nino Lomjaria has released a statement on the inmates' death in Rustavi No.17 penitentiary establishment.

The public defender says in her statement that after spending the entire day in the penitentiary establishment, she learned that no fire safety regulations are in place in the institution.

''The public defender and her representatives have spent the entire day in No.17 penitentiary establishment. We learned that two other inmates injured in the fire had been provided with medical assistance. We talked with both inmates and representatives of the administration and inspected the scene (the kitchen and diner).

During the day, inmates had unrestricted access to phones to call their family members and were provided with food; also, the electricity supply was resumed in almost the entire establishment.

Based on the information obtained, we learned that no fire safety regulations and instructions for responding to emergencies are in place in the penitentiary establishment,'' the statement reads.

The statement goes on to say that a rapid evacuation plan must be implemented in the establishment, and instructions for protecting prisoners from smoke inhalation must also exist there.

According to the statement, the Public Defender's Office will keep a watchful eye on the fire safety situation in the establishment and the ongoing investigation process.