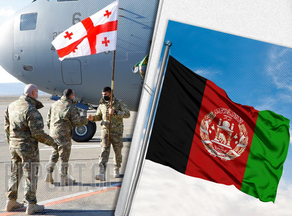 "Deputy Chief of Defense Forces, Brigadier General Irakli Chichinadze, Commander of East Command, Brigadier General Roland Dzneladze, and Commander of I Infantry Brigade, Colonel Zaza Shalamberidze greeted the first unit of Georgian peacekeepers at Tbilisi International Airport. They thanked the military for their honorable service in the international mission, congratulated on their peaceful return to their homeland, and wished them every success," the Defense Ministry reports.

The 13th Battalion carried out a Resolute Support mission under the NATO auspice on Bagram Air Base in Afghanistan for six months.

The unit was responsible for the security of the airbase.

The unit is returning to Georgia gradually; the 13th Battalion was replaced on rotation rule by the 32nd Battalion and has transferred its authority to carry out the mission.