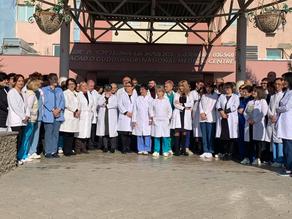 “We would like to respond to accusations made by de facto regime regarding our colleague Vazha Gaprindashvili, who was illegally detained in Tskhinvali. Vazha Gaprindashvili was in Ghudushauri Clinic and never left the office and was performing his professional duties in August of 2008. On behalf of the medical community we condemn the violent and inhumane acts committed against the representative of the most humane profession, we express our solidarity to Vazha Gaprindashvili's family and demand his immediate release”, reads the statement.