Goderdzi Chocheli's House Museum to be opened in Chokhi village 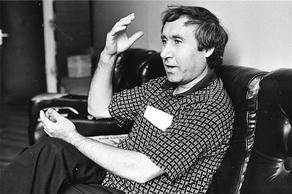 In the village of Chokhi, well-known Georgian writer, poet, scriptwriter and producer Goderdzi Chokeli's House Museum is set to be opened tomorrow on Oct 19, with the ceremony planned to be attended by high officials of central and local government and his family members.

In Goderdzi Chokeli's village, a two-storey building will be constructed, in which the writer's personal office, two exhibition halls, library and office space will be placed, whereas in the museum yard, a stream named after the writer has been built and open stage and sanitary fittings installed.

Goderdzi Chokheli was born in the village of Chokhi on 2 October 1954. After finishing eighth grade at the village school, he continued his studies at Pasanauri secondary school. In 1972, he entered Shota Rustaveli Theatre and Film State University, the faculty of film studies.

His first book was published in 1980. The book was awarded the best debut book prize. From 1981, the book has been published in Russian language. Goderdzi Chokheli has published a collection of verses and short stories: “Village of Twilight Colour”, “Letters of Fish”, “Keep Me Motherland!”, “Elections on Cemetery”; the collection of verses: “Pursuer Fate”, collection of short stories in Italian language “Black Aragvi,” which was translated into other languages as well; novels: “Wolf” and “Priest's Sin”. Goderdzi Chokheli has also directed several films: “Oak Tree Struck by Thunder”, “Mother of a Place”.