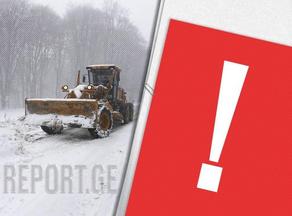 The Roads Department has issued a statement saying that heavy snow has resulted in the banning of traffic on Georgia's road section.

"Heavy snow has led to the banning of trailers and semi-trailers from km39-km62 (Nakerala Pass) of the Kutaisi (Motsameta)-Tkibuli-Ambrolauri highway, which is of international significance. Other modes of transport are permitted,'' the statement reads.

Traffic flow is allowed on other road sections, according to the Roads Department.