'I distance myself from any type of violence': opposition supporter 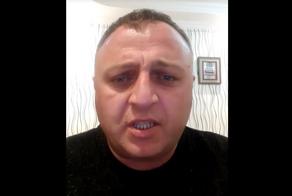 Aslan Vashakmadze, a supporter of the opposition who released a video in which he threatened the police, has released another video saying that strong emotions made him threaten the police, and, actually, he distances himself from any type of violence.

"I have uttered each word as I was anxious. I am worried because the Georgian police refuse to serve the Georgian people and serve Russian oligarch Bidzina Ivanishvili instead. I distance myself from any type of violence, and all Georgian political parties do so.

I want to tell those agencies which spread that video and showed it everywhere to spread this one too. Go to the rally, stand there in the cold, and be beaten by the police. I would be glad to know what you will say then," Aslan Vashakmadze said.

Aslan Vashakmadze has released a video on social media today in which he threatened the police.