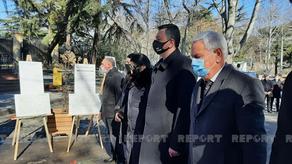 The Embassy of Azerbaijan to Georgia and the Heydar Aliyev Foundation have held a joint information campaign on the 29th anniversary of the Khojaly genocide.

The tragedy photo and video materials were presented on the monitor near the Embassy of Azerbaijan.

Ambassador of Azerbaijan to Georgia Faig Guliyev, employees of the embassy, members of the Azerbaijani society in Georgia, businessmen, and public servants paid homage to innocent victims of the Khojaly genocide, brought flowers to the photo exhibition, and lit candles.

The journal titled 'Justice for Khojaly' and the massacre-related articles in foreign newspapers were also presented there.

Within the information campaign, eight cars owned by different Azerbaijani companies in Georgia are on the move in Tbilisi streets, with placards "Justice for Khojaly" and Mother's Cry Memorial photo attached to them.

A journal titled "Justice for Khojaly" dedicated to the 29th anniversary of the massacre was issued in Georgia at the initiative of the Embassy of Azerbaijan and the Heydar Aliyev Foundation.

The Cry of the Mother Monument is erected in Baku in honor of the victims of the tragedy.

Today commemorates the 29th anniversary of the Khojaly massacre.