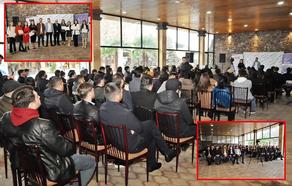 On November 28, the birthday of "Aktual Media" was celebrated in Marneuli, and a certificate awarding ceremony was held for the participants of the journalism course.

The ceremony was attended by Ilkin Husseinov, the General Director of the news portal Aktual.ge, the First Secretary of the Ambassador of Azerbaijan to Georgia - Anar Resulov, Mufti of Eastern Georgia of the Muslim Division of All Georgia, Etibar Eminov Haji Gurban Murguzov, the Deputy Sheikh of the same division, the Chairperson of the Congress of Azerbaijanis of Georgia Hussein Yusubov, Mirtag Asadov, the Chairperson of the Supreme Theological Council of Muslims of Georgia, the Director of Ata Holding Mahabbat Imanov, Tea house head Emin Ahmedov, AZERTAC Special Correspondent in Georgia - Khatai Azizov, Mtavari Channel journalist Jeyhun Muhammadal, Nahid Gurbanov, the General Director of the news portal Interpress.ge, lawyer Eda Gojaeva, Civil activist Samira Ismailova, Shorena Khukhua, the Principal of Marneuli Public School No. 2, as well as Turkish and Azerbaijani businessmen, students, journalists, and other guests.