Journalists hold protests outside Administration of Government of Georgia - PHOTO 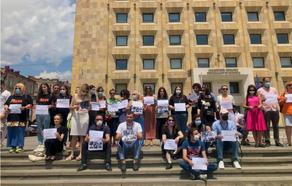 The Georgian Charter of Journalistic Ethics has organized a protest rally outside the Administration of the Government of Georgia.

Rally participants protested against violent actions to which representatives of different media outlets were subjected and demanded that those responsible be held accountable.

On July 5, opponents of Tbilisi pride attacked journalists. The MIA of Georgia said that following the investigation activities, they determined that violent crimes were committed against 55 citizens, with 53 being representatives of different media outlets.

Far-right attacks were also carried out against representatives of various media outlets yesterday.

Photos by the Georgian Charter of Journalistic Ethics